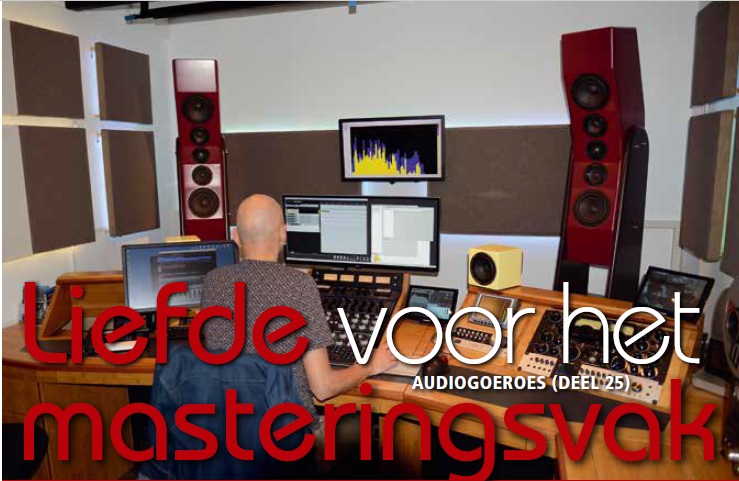 Interview with Arjan Rietvink by Frits de With. Published in Music Emotion Magazine

We all know that a nice CD, LP or even a reel to reel tape benefits from a good mastering. Different recordings all differ considerably in terms of sound and strength. For a good listenable album all these different types of recordings must be mastered to assure the album will sound as an attractive whole. So you won’t constantly have to run to your volume button because one piece of music is too loud and another piece sounds too soft.

The Nagra S4 was used for the capturing of the "Pure"album.

This time we are visiting Baarn in the Netherlands where Arjan Rietvink runs a professional mastering studio. In his studio I immediately spotted two beautiful tape recorders. A Tascam BR-20 and a Technics RS-1500. For this occasion we brought a Nagra S4 with us. We are going to use it to playback the recordings of ‘Pure’. Pure is a super analog recording that I made years ago. Now we are going to master it digitally at 24bit/88.2 kHz. To be honest, even in the digital domain it still sounds surprisingly good. The analog character of this recording is still standing firmly.

The career path Arjan took is an interesting one. It started as a hobby. He made many tape recordings and produced mixes by combining multiple tracks. Analog tape recordings were always a passion for Arjan. He has made many mixes in the past. In the beginning he made mixes for dutch radio legend Ferry Maat. Very often you could hear Arjan’s mixes on the radio at “The Ferry Maat Soulshow”. A&R managers of record companies started to notice his mixes and contacted Arjan for mixing their CD’s.

Arjan Rietvink interviewed by Ferry Maat in 1993 about one of the mixes he made for The Soulshow.

He started his own company at April 1st 1996. In the beginning he was mainly mixing multiple pieces of music for Arcade, Sony and other music companies. When rhythmically mixing the music pieces he wasn’t easily satisfied with the result. First Arjan made sure the beats were aligned perfectly. However when the transition between two tracks ended a difference in sound could still be heard. So he tried to correct that by using equalizers. This worked so well that the transitions between two tracks were now flawless. He wondered why there were such big differences in sound between two records of the same genre. That’s when he began to delve more into mastering. 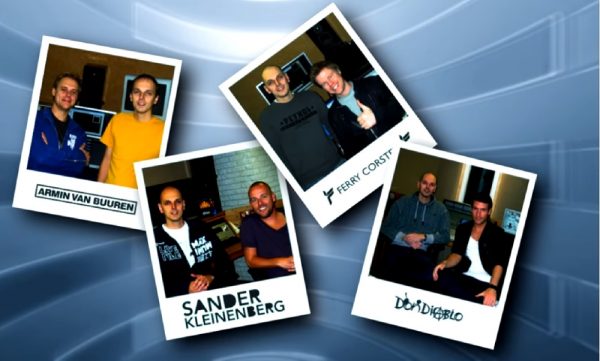 Some of the artists Arjan has worked with over the years

Since then he has started mastering albums for major record companies such as Universal, Sony and EMI. But also Dutch independent companies such as Combined Forces, Purple Eye, Spinnin’ Records and Armada Music (Armin van Buuren) were among the clients of Arjan Rietvink Digital Mastering BV. And a lot of those companies still are his clients today. At some point Arjan had too much work to handle himself. So he asked Marco van der Hoorn to join him. They have known each other since childhood. Marco also shares the same passion for music, mixing and mastering. They have been working together ever since. 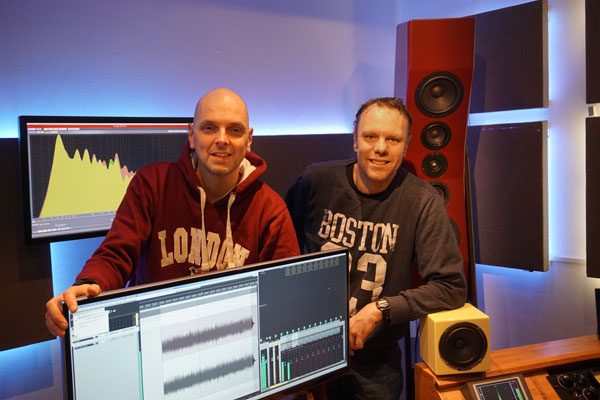 At a certain moment the market changed. As a result of this the artists became responsible for the mastering instead of the record companies. So instead of working with a few record companies Arjan (& Marco) now had to deal with hundreds of individual artists who wanted their tracks mastered. At the same time the speed of the internet was increasing. So it became possible to send tracks to mastering companies using the internet.
Especially for this group of customers Arjan created the online mastering website “Arjan Rietvink Online Mastering” (ar-onlinemastering.com”). Producers from all over the world started to deliver their music online using his website. Sometimes these customers are beginning producers. Other times big names like Burak Yeter and Yellow Claw send their tracks to the online mastering website.

Because producers nowadays do not physically visit the studio anymore Arjan created a system where producers can still indicate their wishes for the mastering. He thinks it’s very important to listen to the wishes of the artist. After all it is their music he’s working with. Artists often have strong feelings about the sound of their tracks. It’s up to Arjan and his team to do the best possible job for them.

To create accurate masters it’s important to use a good sound system. The system must not color the sound because this leads to masters that do not translate well on other sound systems. The sound system in Arjan’s studio uses a (hand build) Maselec monitor controller. Further he uses a NAD M22 amplifier, Kimber loudspeaker cable and speakers especially designed for his studio. The speakers are built and designed by Ruud Jansen (Speakerland Oss).

By building loudspeakers by a specialist you are not limited by restrictions that apply to speakers being mass produced in a factory. The design of a factory loudspeaker can not be tailor made for a specific application. Arjan discovered the “DIY / custom built” loudspeakers at a young age and always has seen the value of this concept. Obviously the studio is also acoustically tuned so that the room has as little influence on the sound as possible.

During mastering Arjan tries to look for solutions to get rid of sonic problems in the original recording. The challenge for Arjan is to make every recording sound at it’s full potential. A lot of the music that is sent to Arjan’s online mastering website is electronic dance music. The problem with electronically produced music is that it can sound harsh and cold sometimes.

With his tube equalizers, tube compressors and analog tape machines he tries to add some analog character to the sound. This removes the harshness from the sound and adds an atmosphere that can not be created digitally. For this analog feel he uses his Shadow Hills Mastering Compressor a lot. This mastering compressor is hand built in America. Arjan’s studio is one of the few mastering studios in Europe that own a device like this. The compressor is not used for a heavy compression effect. It is used for the nice analog sound signature that this device can add to the sound.
For instance you can switch between 3 different output transformers that all have a different effect on the sound. A half dB of optical compression combined with a half of a dB tube compression can give a magical effect to the sound.

During the mastering Arjan also uses Plug-ins. With nowadays digital techniques you can make corrections to the sound with surgical precision. Something that is just impossible with analog technique.

Besides EDM (Electronic Dance Music) Arjan also masters acoustical music. He has mastered many of the “2 meter sessie” CD’s. A while ago he discovered that one of those CD’s ended up at position nr 15 of the Best sounding CD’s all times chart published on Hifi.nl. Arjan is very proud to show up on a list like that. The list is compiled by consumers with lots of listening experience and more than average listening equipment. In this list you can also find CD’s from Diana Krall, Miles Davis, Yello and Pink Floyd. 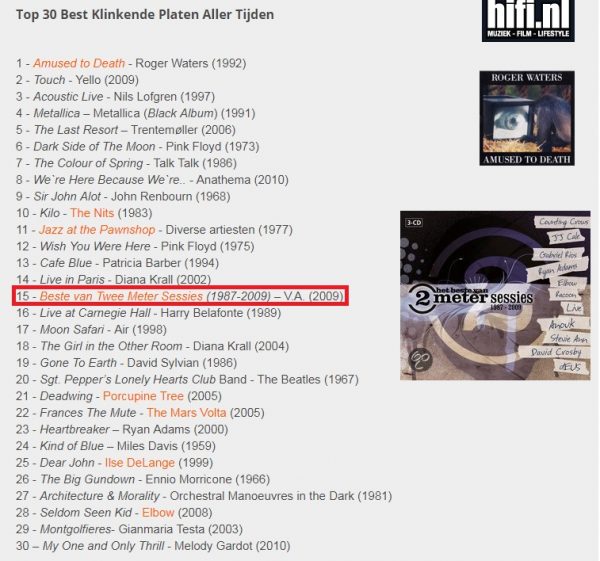 At number 15 in the "Top 30 Best sounding records"

Sometimes original mastertapes are no longer available for a certain project that a record company wants to release. He prefers tapes but he can also master from vinyl. In this case clicks, noise and rumble have to be removed. As an example of this Arjan mentioned the Traxbox.
This contains the first 75 releases of that label. Most of the songs on this album were restored and remastered from vinyl. In an interview one of the concerning artists (Marshal Jefferson) stated that the sound quality was greatly improved. 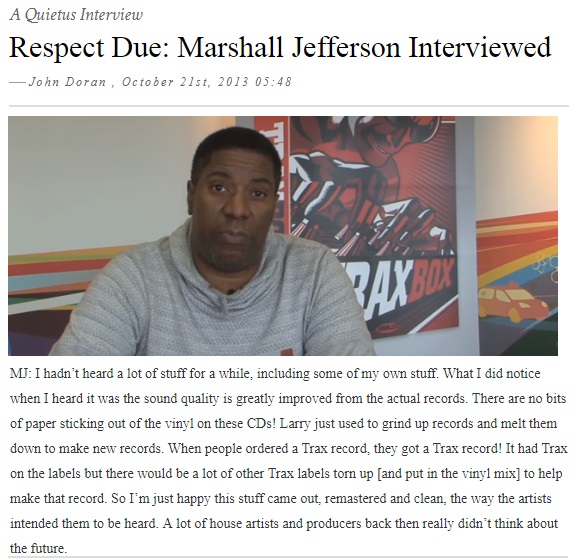 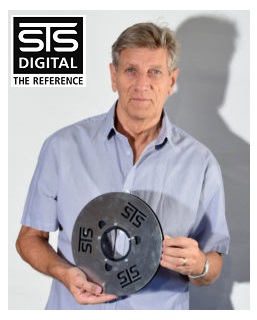 It’s a pleasure to master my projects at Arjan Rietvink Online Mastering. Arjan is a sympathetic guy with a great passion for the mastering profession. And that is exactly what you can hear in the mastering result. 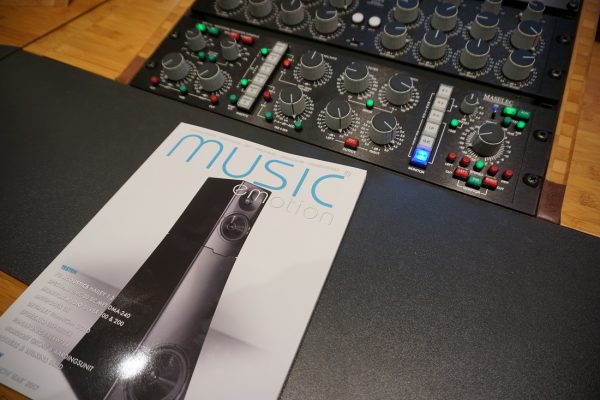 This Article was originally published in the Dutch HiFi magazine "Music Emotion" in November 2017.

Note: This article was published in the dutch language in a magazine called: Music Emotion.
Frits de With, the writer of the article, gave me permission to translate it and publish it on our website. To improve readability on a screen I added some pictures. 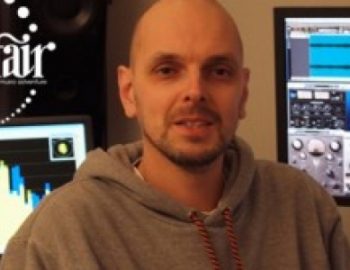 Dancefair is an educational event for DJ’s and music producers. 6000 [...] 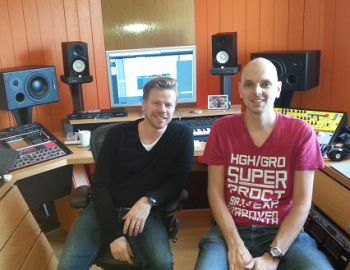 Recently we get a lot of requests from clients to visit their studios to [...] 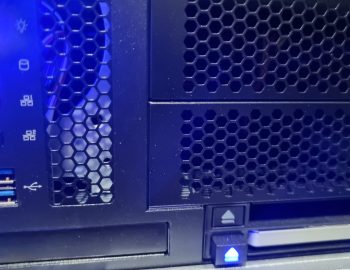 The last few years a new kind of online mastering website is found on [...]